What people are saying...
"A whopping new comedic talent.  Staring at him — and you find yourself staring at him in almost every sketch — you come to see that he has two huge assets going for him. One is a kind of manic physicality: when he finds some flailing motion, he proceeds to repeat it several times, precisely. It's beautifully weird. The other is his knack for old-fashioned detail: where other performers layer a blackout scene with, say, three distinct takes or beats, he sticks in about a dozen separate moments, each one clear, communicative and cascading into the next. You're put in mind of Martin Short at times; maybe a touch of Jack McBrayer, who also had his own particular remove from the norm and also was a character even when not playing one. But Hartman is his own dude."
-Chris Jones, Chicago Tribune

"Overall, however, Panic belongs to Hartman. Short and thin, with a deadpan reminiscent of a silent-movie comedian, he continues to make the case for his physical-comedy genius. Hartman's body language helps everything he's in succeed, from the cowpoke skit to an oddly touching bit centered on a deaf bully. An otherwise pointless passage about incompetent secret service agents is saved entirely by his outlandish intervention. He's extraordinary."
-Tony Adler, Chicago Reader

"John Hartman makes an especially formidable presence throughout...He uses this intense style of physicality to his advantage again toward the end of the show as half of a redneck couple in a breakup argument. He’s hard not to watch at any given moment."
-Zach Freeman, NewCity Stage

"Hartman was the performer that grabbed the spotlight. Hartman is a short, slender young man who could pass for a teenager. He has a riveting stage presence and his boyish appearance works for him no matter what character he portrays, from cute to abrasive. Hartman is a natural for the Second City style of skit and sketch comedy but I suspect he would be a wow in a straight play, especially a comedy. The man has all the tools."
-Dan Zeff, Chicagoland Theater Reviews

"Depraved New World's cast is also the strongest I've seen on the Mainstage, including obvious standout John Hartman, who brings a wonky physicality and wealth of weird ideas to the table."
-Matt Byrne, Chicagoist

YOUR FRIENDS AND ENEMIES 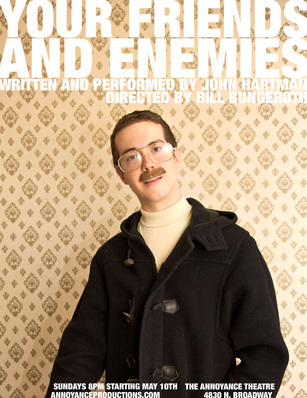 "Never have I been more amused by a guy fidgeting with his junk than in Your Friends and Enemies, a new one-man show starring comic and improviser John Hartman, whose name I’m filing away in my mental Rolodex. This evening of solo sketch, which opened Sunday at the Annoyance, begins with Hartman peeping coyly out from behind a window, then a wall divider and finally a doorway. “Just checking to make sure there are no creeps in the audience,” says Hartman with a faint smile, then proceeds to banter with the audience while playing pocket pinball, sniffing his own ear wax and sucking off a Blow Pop like there’s no tomorrow. Hartman disarms with charm, then ratchets up the icky and in the process offers up 60 minutes of guilt-free comic perversions through a variety of different characters.

Hartman has range. With the application of a fake mustache, he transforms into a closeted gay clubber in Bible-thumping low country. Minutes later he’s a haughty expatriate writer, admonishing a junior high school for its theatrical re-creation of his work. A few scenes later, Hartman is pulling on a pair of glasses and BAM!, he’s a dowdy NPR commentator who goes rogue with his book reviews. I couldn’t help but think he belongs in the Amy Sedaris school of hilarious multiple personality disorder.

Your Friends and Enemies is finely edited, the credit no doubt belonging to director Billy Bungeroth. So often in sketch comedy the scene work needs the plug yanked on it much sooner, but here scenes function more like character showcases. As soon as Hartman delivers the laughs, lights are down and we’re on to the next one. Ditto the solid pacing which allows the audience to ably digest every moment. For example, in one memorable scene Hartman plays a pedophile in a Douglas Sirk-like melodrama who spontaneously breaks into song, but this is followed by a more straightforward scene in which a foreign exchange student begs his host family not to take him to any more improv shows. I thoroughly loved Hartman’s fringe characters coupled with the show’s whizbang timing. Hartman proves his friends and enemies share a common thread: They’re highly entertaining to watch."
-Jason Heidemann, Time Out Chicago 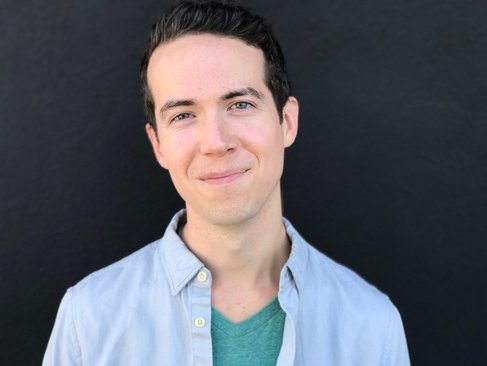 "Sharp and entertaining...Hartman is the strongest actor of the bunch - he can play dead serious one minute, dippy the next... (He) ups the quality of every scene in which he appears. Hartman is a performer who digs in deep and finds the weird tics of his characters, and the show feels special because of his contributions."
-Nina Metz, Chicago Tribune


"But it's John Hartman who gets the most laughs with his wry, dry performance."
-Donald V. Calamia, Between the Lines